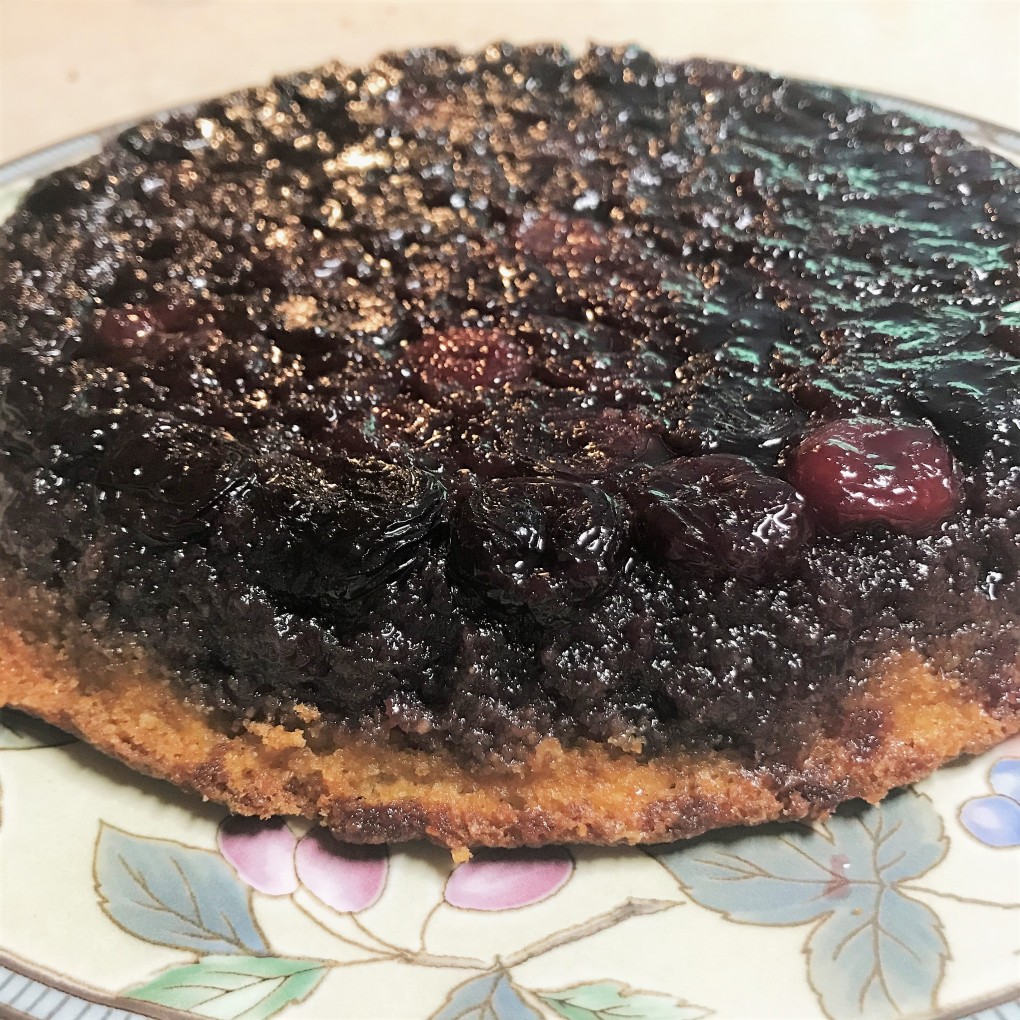 A great meal deserves a sweet, delicious ending, and this one showcases the plump and luscious dark red cherries that were everywhere this summer. The cake is moist and flavorful, rich with buttermilk, almond flour, eggs and real butter, and the buttery brown sugar topping is a little on the boozy side, plus the deep, dark sweet cherries. And the whole thing is elegantly draped with a dollop of amaretto-spiked whipped cream.

To tackle the unenviable job of pitting the cherries, I purchased a nifty device that gets the job done, six cherries at a time! If you’ve ever tried pitting cherries without a tool, you know that it cannot be done without making a huge mess. In previous attempts, I’ve balanced the cherries—one at a time, of course—on the neck of an empty wine bottle, then held the cherry while shoving the end of a chopstick through it. It left holes in the cherries, the pits inside the bottle, and red juice stains all over everything else in the room, including me. It’s the reason that, for the most part, I’ve relied on frozen cherries whenever I wanted to make a cherry dessert. I adore fresh cherries, but I’d only bought them to snack on, and only when I was flying solo because the whole spitting-out-the-pits part conjured memories of the 1987 film The Witches of Eastwick. There’s just no way to do it gracefully.

Suffice to say, this $15 tool has changed the game for me. After rinsing the cherries and pulling off the stems, I loaded them into the tray and pressed the top down. Boom!

And just like that, the pits are pushed out the bottom and into a receptacle, leaving the cherries intact but devoid of pits. I finished the entire bowlful in about 8 minutes. I’m not prone to give kudos for “uni-task” tools, but this one really took the pain out of what would otherwise make me choose a different dessert. Besides, as I reminded my husband, Les, this will also come in handy when I need to pit whole olives (which I’ve never tried but now I can).

After the cherries were pitted, I got busy making the topping, which goes into the skillet first. This part of the recipe felt familiar because I’ve made a similar upside-down skillet cake with peaches. I start by melting butter with brown sugar, then adding amaretto to the mix for a subtle almond flavor that echoes what will be going on later in the cake batter. The cake is easy to make, too—cream together the sugar and butter, add the eggs and flavor enhancers, and then alternate the dry ingredients with buttermilk until it’s ready to spread over the topping. The rest of the delicious magic happens in the oven.

This cake has a dense, but not heavy texture, and the warm almond flavor permeates every layer while the soft, juicy cherries satisfy the sweet tooth. It keeps well, too, which is always a bonus in our empty nest household. As odd as it may sound, Les and I found that we enjoyed this cake even more a couple days after I baked it—ice-cold, straight from the refrigerator. The cake part remained moist (thank you, buttermilk!), and the cherry flavor was more pronounced.

Ready to make it?

Whipped cream for serving, if desired

Amaretto is an Italian, almond-based liqueur. It is lower proof than whiskey or vodka, slightly sweet and plays very nicely with cherries. If you avoid alcohol, you can get close to this flavor with almond extract. Drizzle 1 teaspoon over the cherry mixture and increase to 2 teaspoons in the cake. Real almond extract, by the way, also usually contains alcohol as a suspension for the almond flavor, but the amount will be minimal.

Remember the rule for measuring flour? In baked goods such as this, using the correct amount will really make a difference. Dipping your measuring cup straight into the flour container is a sure-fire way to have a dry and crumbly cake. I trust a kitchen scale for most of my baking, but if you don’t have one, follow the simple “fluff, sprinkle, level” method—fluff the flour with a whisk or fork, sprinkle it over the dry measuring cup to overflowing, level it off with the back of a knife.

Don’t be tempted to substitute regular milk for the buttermilk in this recipe. The acidity in the buttermilk will lend a subtle tanginess to the cake, and it also reacts with the baking powder and soda for leavening.

Allow the cake to cool completely. Cut into wedges and serve with a dollop of freshly whipped cream (spike with amaretto, if you wish).

Store leftovers in the fridge, covered with foil or plastic wrap.

Want to print this dessert recipe?