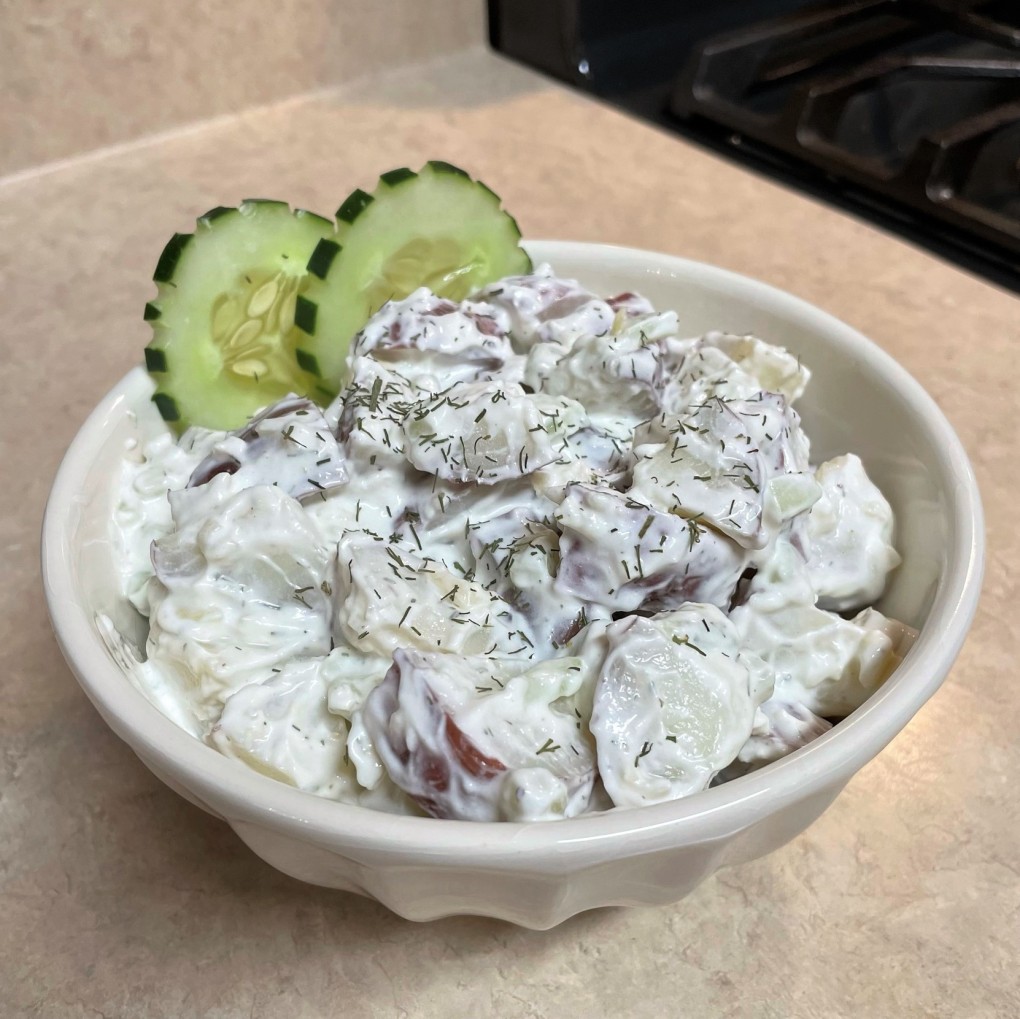 There are as many ways to make potato salad as there are grandmothers, and although my own Gram never made this version, I know she would have liked it. Gram introduced me to yogurt when I was a young girl, and it’s a good thing she did, for a couple of reasons. First, I love it in all its forms—plain, Greek, drinkable, etc.—and second, I likely would not have tried yogurt at all because my mother hates it.

If the passion for food and cooking is passed down genetically, then all I can say is that it skipped a generation in my branch of the family tree. My mom is not a bad cook, just a basic (and infrequent) cook, and the meals she served when I was young never strayed from what she herself liked to eat. My friends, that was a short list. On the good side of things, this allowed me to experience Mexican food at an early age, and it is still a favorite. On the flip side, I nearly missed out growing up on so many things I love today, including cream cheese, eggplant, bleu cheese and, well, I could go on for days. Not only did my mom not enjoy those foods, but she would make disgusted faces about the very idea of them, and I might have grown up believing they were poisonous, if not for my grandmother’s influence.

Yogurt is about as far from poison as you can get; it’s rich with protein and gut-nourishing probiotics, and I learned to love the little cups of it that my grandmother always seemed to have in the fridge when I visited. My favorite flavors, as I recall, were lemon and the ones with blueberry or peaches that you stirred up from the bottom. These tasty treats paved the way for me to love Greek yogurt in my adult years, and most often with no fruit or sugar added. This powerhouse food is strained to a thicker texture than regular yogurt, so that the protein is concentrated, making it a fantastic base for healthy breakfast smoothies. In our house, we regularly reach for Greek yogurt as an even exchange for sour cream, and we whip it into our scallion cream cheese to make it more spreadable.

As summer inches toward its end this year, I had been considering ways to liven up my basic potato salad recipe, and it occurred to me that tzatziki—the bold and zesty, Greek yogurt and cucumber sauce—could be a terrific addition to a potato salad. I am not crazy about having a lot of mayonnaise in my salads, and the idea of refreshing tzatziki sounded pretty darn good. I was right.

While you cook the potatoes, make the tzatziki. Begin by chopping or shredding a peeled and seeded cucumber, then use salt to strip it of excess moisture and blend it together with a healthy dose of Greek yogurt, garlic and dill. Combine that with a touch of mayonnaise and fold it into cold, boiled potatoes, and you will have a side salad that’s perfectly cool and fresh, served with burgers or any kind of meat kebab on the grill.

About 1 1/2 pounds red or yellow potatoes