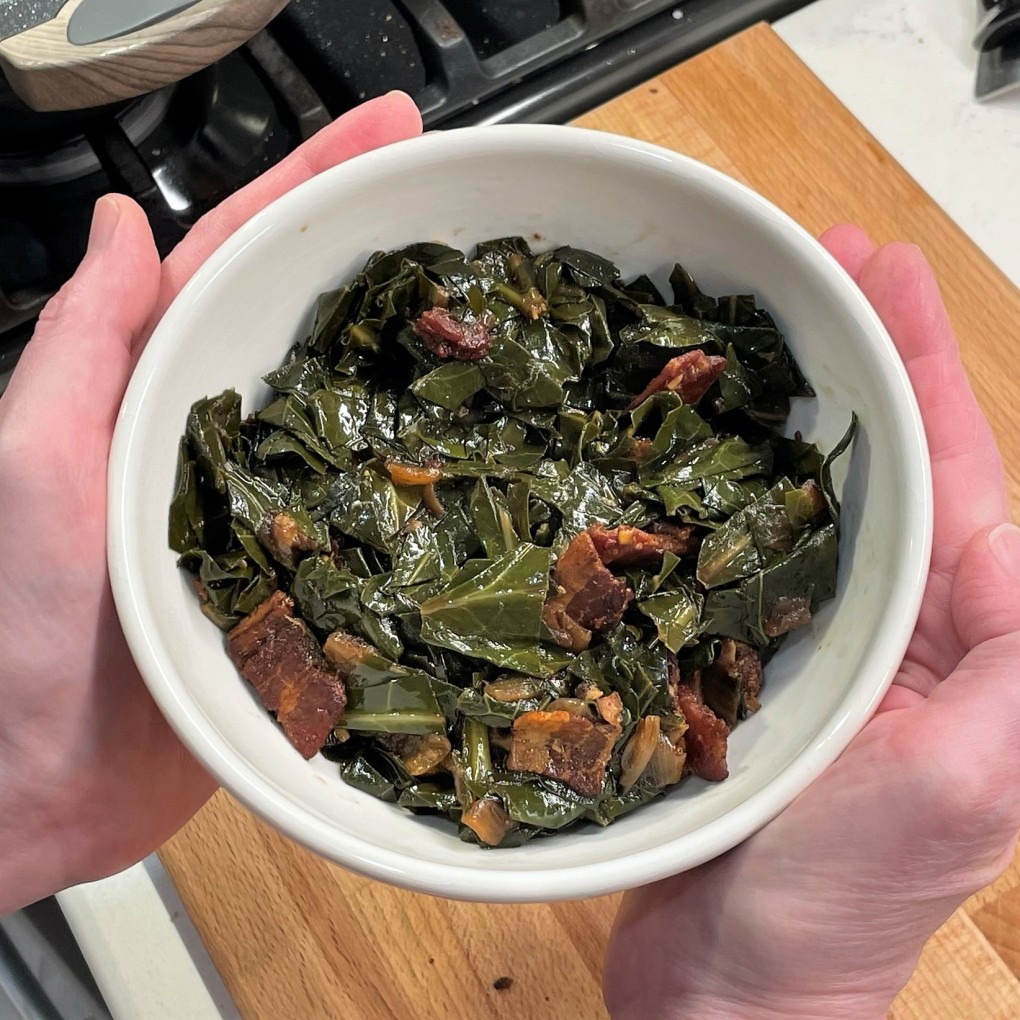 After a mere 30 years living in the South, I finally learned how to make collard greens, one of the staple foods of the region. It happened quite serendipitously, as I described in my original recipe for “Just Collards.” Since that fateful day, and the quick walk-through given to me by a kind stranger, I have made collards many times, using the same basic recipe. My husband and I enjoy them with everything from fried chicken that I pick up at the deli counter, pulled pork that he makes on the smoker, and even occasionally just on the side with some homemade mac and cheese.

Collard greens, in case you don’t already know, are one of nature’s “superfoods,” and they can be eaten raw, but most often you’ll find them braised in liquid. Collards are so packed with nutrients (including vitamin C, calcium, immune-supportive B vitamins and magnesium), that even the resulting cooking juices are considered to be sustaining. They are a very hardy crop, easy to grow in nearly every climate, and they are widely revered here in the South.

Until now, I have followed the same basic recipe—cook up some chopped bacon with onions, add chopped collards to the grease, splash in vinegar and broth and let them simmer until tender. Easy enough, and always delicious. I can’t quite explain what happened last week that inspired me to put a hot and spicy, bold and boozy twist on them—maybe a burst of Black History Month energy—but, mercy, was it ever good!

I amped up these collards with fresh garlic and a few extra shakes of a specialty pepper mix we love, which includes smoky chipotle, fruity ancho and fiery habanero. The combination of hot pepper flavors sent these collards over the top into kick-ass territory. The real kicker, though, was the shot of whiskey I splashed into them. And not just any whiskey, but the only brand I happened to have on hand when my imagination started running—Uncle Nearest 1856. If you have not yet heard of this whiskey, I hope you’ll take a few minutes to read about it. Uncle Nearest is a Black-owned brand, built on the legacy of Nathan “Nearest” Green, an enslaved man who taught Jack Daniel how to make whiskey. If you’re thinking, “how can that be?” well, this is why we have Black History Month, so we can fill in the gaps of what we thought we knew.

Uncle Nearest 1856 was the basis for the Long Time Coming red cocktail I created in honor of Juneteenth last year, and at 100 proof, it’s pretty sturdy. The charred oak barrel notes of the spirit imparted additional smokiness to these collards, which cooked up in about half the time as my regular, go-to recipe. That might have been the whiskey, or it could just be that I served them up earlier than usual, because they smelled so darn good.

In a large skillet or pot, cook the bacon and onion over medium heat until the bacon has crispy edges and the onion is softened. Add the garlic, season with a bit of salt and pepper, and cook another minute or two.

Clear a space in the center of the pan and add about a teaspoon of olive oil. Shake the red pepper flakes into the oil to activate the flavors, and then toss the bacon-onion mixture to spread it around. Add the collards, a handful at a time until wilted, and toss to cook. When the collards have softened and collapsed into the pan, add the whiskey and vegetable broth and bring to a boil. Reduce heat and simmer, covered, until collards are tender. This will take anywhere from 25-50 minutes, depending on your simmer level and preference. Adjust salt and pepper to taste before serving.