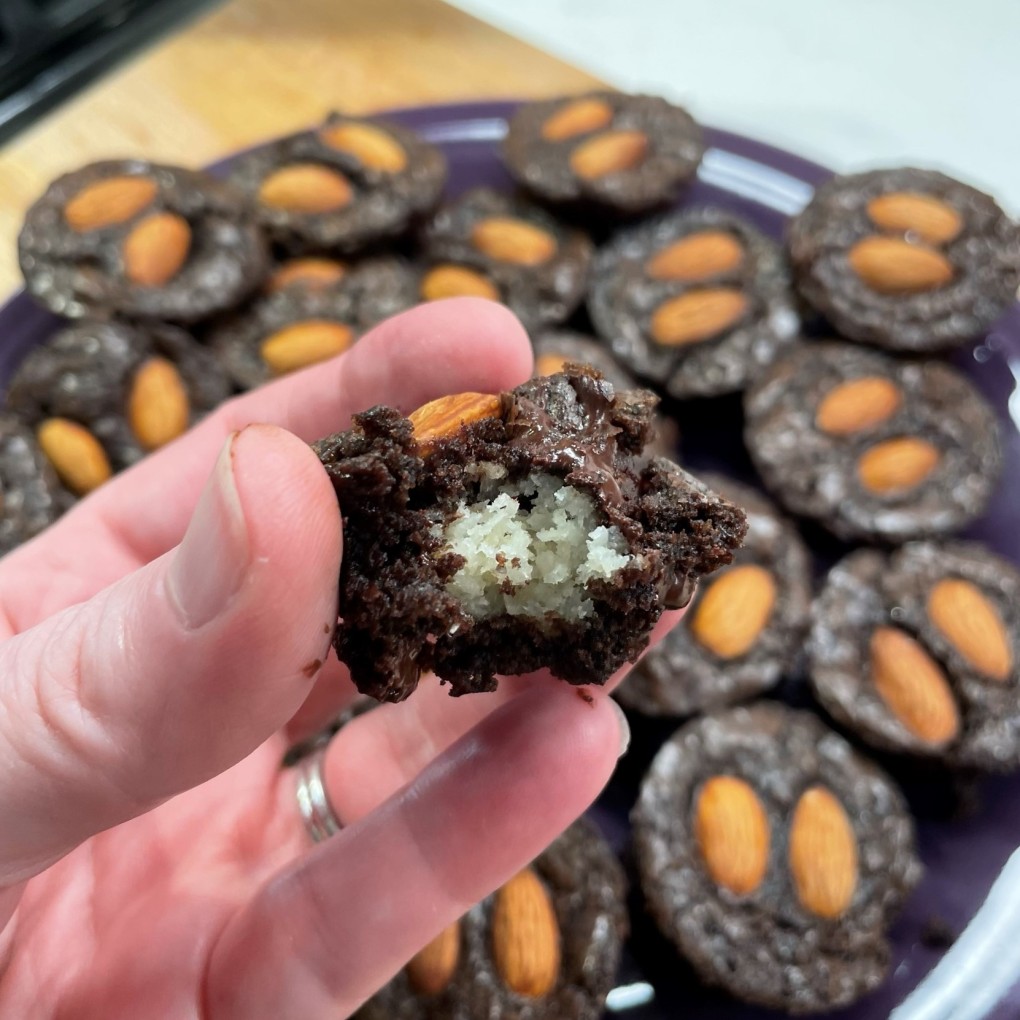 My taste for chocolate has evolved exponentially since childhood. The candy bars I loved back then—Kit Kat, Snickers, Mounds and Almond Joy were some of my favorites—all fall a little flat now that I have experienced fine, artisan chocolates. After you develop a palate for high quality, single-origin chocolate, it’s tough to go back. But occasionally, nostalgia sneaks in and makes me crave a taste of yesteryear, and that’s what happened when I had to reach past a jar of unsweetened coconut to get to my go-to brownie mix.

Why couldn’t I turn my brownies into a play on an Almond Joy candy bar, I thought, but with an elevated presentation and more texture? I reached for almonds, too, and had only one dilemma—how to incorporate the coconut so that it didn’t get lost into the brownies. I didn’t just want the flavors of an Almond Joy to be present, I wanted it to look kind of like an Almond Joy candy bar, too, and that meant I could not just add coconut to the brownie mix. No, I needed to create a filling that would be enveloped inside the brownie, and I wanted it to be bite size with two almonds, just like the candy bar.

I found a recipe on Pinterest for a coconut filling intended for layer cakes, and as I considered the steps of cooking the milk and sugar together until it was dissolved and thickened, it occurred to me: isn’t that basically sweetened condensed milk, and why not just use that? It was perfect for transforming plain, shredded coconut into a thick, sticky, coconutty filling.

My brownie mix got an extra boost of dark chocolate from a spoonful of dark cocoa powder. I did this because I always wished that the candy company had made a dark chocolate version of the Almond Joy—sort of a Mounds-Almond Joy combination thing. I also gave the almond flavor a boost with a touch of almond extract added to the liquid ingredients used to make the brownie batter.

A few more notes worth mentioning before I dive into a visual walk-through of how I put these fun little treats together:

To keep this from being too sweet, I combined equal amounts of sweetened and unsweetened shredded coconut. The latter is sometimes labeled “dessicated” coconut, and you can find it in the baking aisle of a well-stocked supermarket or online from Bob’s Red Mill (where I get it). This is my preferred coconut for most recipes—cookies, smoothies, muffins, etc.—and I chose to use some of it here because I knew the filling would be sweet enough with the addition of the condensed milk and the amount of sweetened coconut. I pulsed the coconut in the food processor, too, to knock down some of the shaggy texture.

My go-to brownie mix is Ghirardelli Dark Chocolate, but (I can’t believe I’m about to say this) the chocolate chunks included in the mix may not be right for this recipe. If you are making this as mini muffins, as I did, you will find that the melted chocolate bits hinder the work of loosening and removing the brownie bites from the pan. The dark chocolate flavor is great but consider using a brownie mix that doesn’t have chips or pieces of chocolate in it; you’ll have an easier time removing the brownie bites without breaking them.

Finally, and this is important, the amounts of brownie batter and coconut filling exceed what is needed in the 24-count mini muffin pan. I had enough of both left over to make a small skillet brownie, and trust me when I tell you, that was not a bad decision either. If you decide to do this, I’d like to suggest that you eat it warm. Mmm…

OK, preheat the oven to the temperature suggested on your brownie mix, and let’s get this started!

So, was all this necessary? Couldn’t I have just chopped up some Almond Joy candies and added them to the brownies, the way I did with the Leftover Snickers Brownies I made at Halloween a few years ago? Sure, and that would have been tasty, too, but this was a lot more fun. 😊 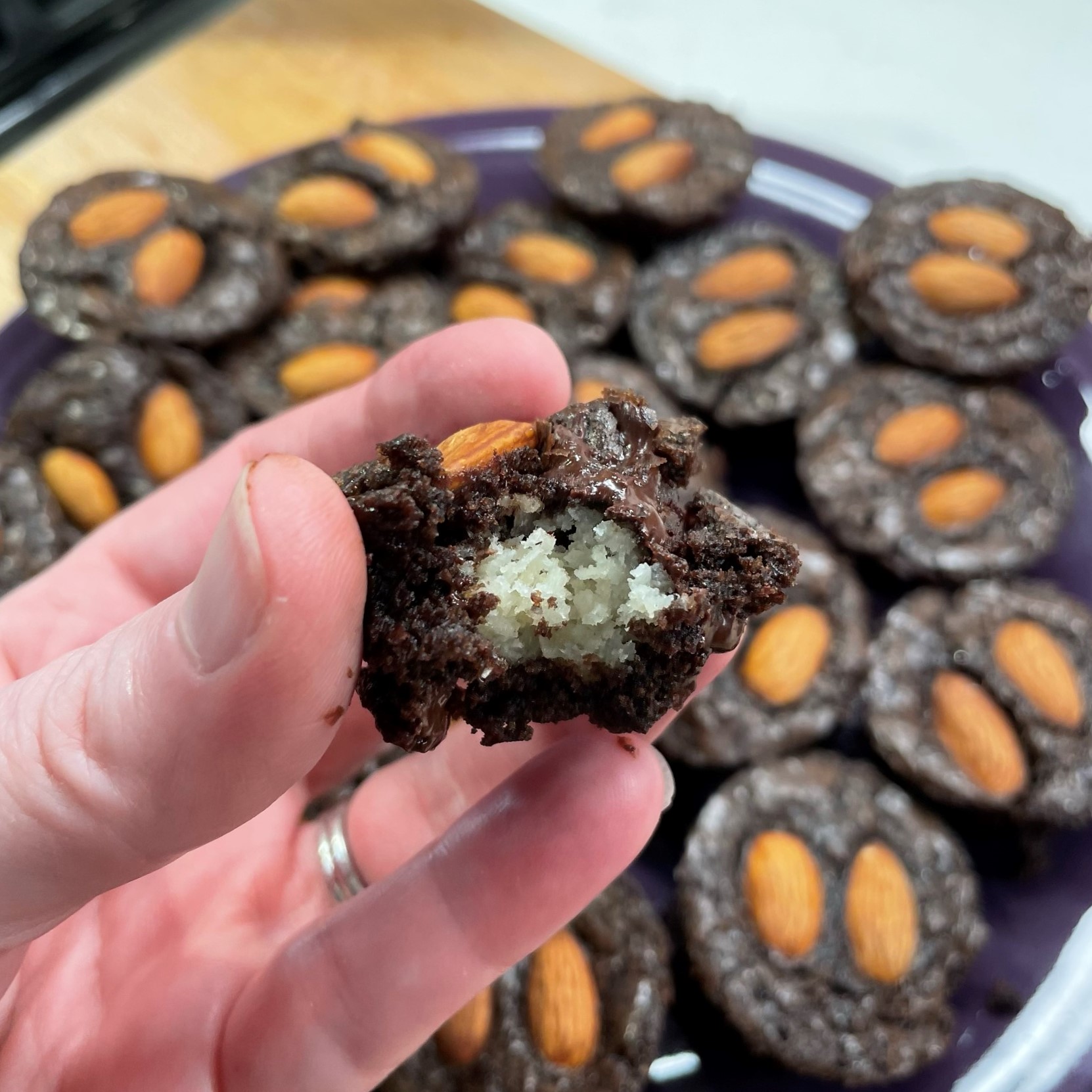 This is a fun way to dress up a box mix, bringing together the flavors of a classic candy bar with fudgy, soft and chewy brownies.

Note that this recipe will yield more batter and coconut filling than you will need for a single pan of mini muffin-size brownie bites. Plan ahead to use up the rest in a small baking dish or extra mini muffin pan.