Now that we’re fortunate enough to have a garden again, thanks to Terrie’s persistence, we have a bounty of summer tomatoes to deal with.

And recently I had the chance to create a pizza sauce. I used to always make my own sauce when I made pizza (pre-Terrie, pre-sourdough) with store-bought dough. But we’ve been using sauce we buy at a market because there’s quite a variety now and they’re way more flavorful than even just a few years ago. But homemade sauce, that’s the good stuff. And we have fresh Roma tomatoes, so why not?

As an aside, I should note that I’ve been gardening and canning off-and-on for 25 years, but several years ago conceded gardening to Terrie for two reasons—the persistence of the deer wore me out, and in 2013, I had an allergic reaction to yellow jacket stings and was advised by my doctor that activity in the grass where yellow jackets hung out could be dicey for me. And our raised-bed garden is right in the middle of a lot of grass. Every time I go near it, I always see bees buzzing and I’m on high-alert mode.

But back to the story. Sauces are a big thing for me. Before Terrie, I would concoct all kinds of sauces for things I grilled. My go-to sauce for grilled chicken, for example, was a combination of five ingredients that I can still name from memory even though I’ve not made it that way for years: a base barbecue sauce such as Sweet Baby Ray’s, Italian dressing, Kraft Catalina dressing, duck sauce (most often Saucy Susan brand), and some splashes of either soy, teriyaki or hot sauce depending on my mood.

Under Terrie’s watch, however, we have eliminated anything containing ingredients such as high-fructose corn syrup (bye-bye Sweet Baby Ray’s) and soybean oil (see ya, Kraft Catalina). The result is that we’ve eliminated a lot of my go-to’s, and to be honest, I don’t mind that. When I create a sauce now, it’s with more natural ingredients and usually means I’m investing my own labor, starting with sautéing vegetables and ending by blending. That’s how it was to be when I told Terrie I wanted to make a pizza sauce.

To increase my knowledge, I searched the inter-webs for pizza sauce recipes. I know how to create “Sunday gravy,” but a homemade pizza sauce from scratch is a different animal. Do you know that almost every recipe out there, including in the cookbooks we have at home, all start with one can (28 ounces) of plum tomatoes? So I changed the search to include “pizza sauce using homegrown tomatoes.”

The problem is I was mostly interested in a recipe by one of Terrie’s favorite chefs, J. Kenji Lopez-Alt. And he also used canned tomatoes. I remembered another bit of Terrie’s constant advice—don’t be married to a recipe; use your instinct. As a result, I used the Lopez-Alt recipe as a baseline but was able to embellish it with my own touches, like fresh tomatoes.

This included blanching (and then ice bathing) the tomatoes, sautéing garlic and some seasonings in a combination of olive oil and butter, roasting and dicing a sweet red bell pepper, and then adding an onion cut in half for the cooking (but removing at the end), then whizzing it up smooth with an immersion blender. The end result was amazing!

There was just one teeny problem. It’s not quite pizza sauce.

Rather, the sweetness of the red bell pepper and spice of the red pepper flakes meant it read uniquely, a cross between roasted red pepper sauce (like the one linked here that I made last summer) and something akin to vodka sauce (but without vodka, go figure). It was more complex than I wanted for pizza, which to me is a more tomato-forward and simple taste. We wound up using this sauce instead for turkey meatball subs. The subs had a tangy, bright pop thanks to our garden ingredients, and Terrie promises to share her recipe for the meatballs soon. The rest of the sauce (and meatballs) found its way into a stuffed zucchini boat, thanks to inspiration from a recent post on Dorothy’s New Vintage Kitchen.

As for my desire to make pizza sauce, well, we still have plenty of Roma tomatoes coming in. Stay tuned.

Not Quite Pizza Sauce 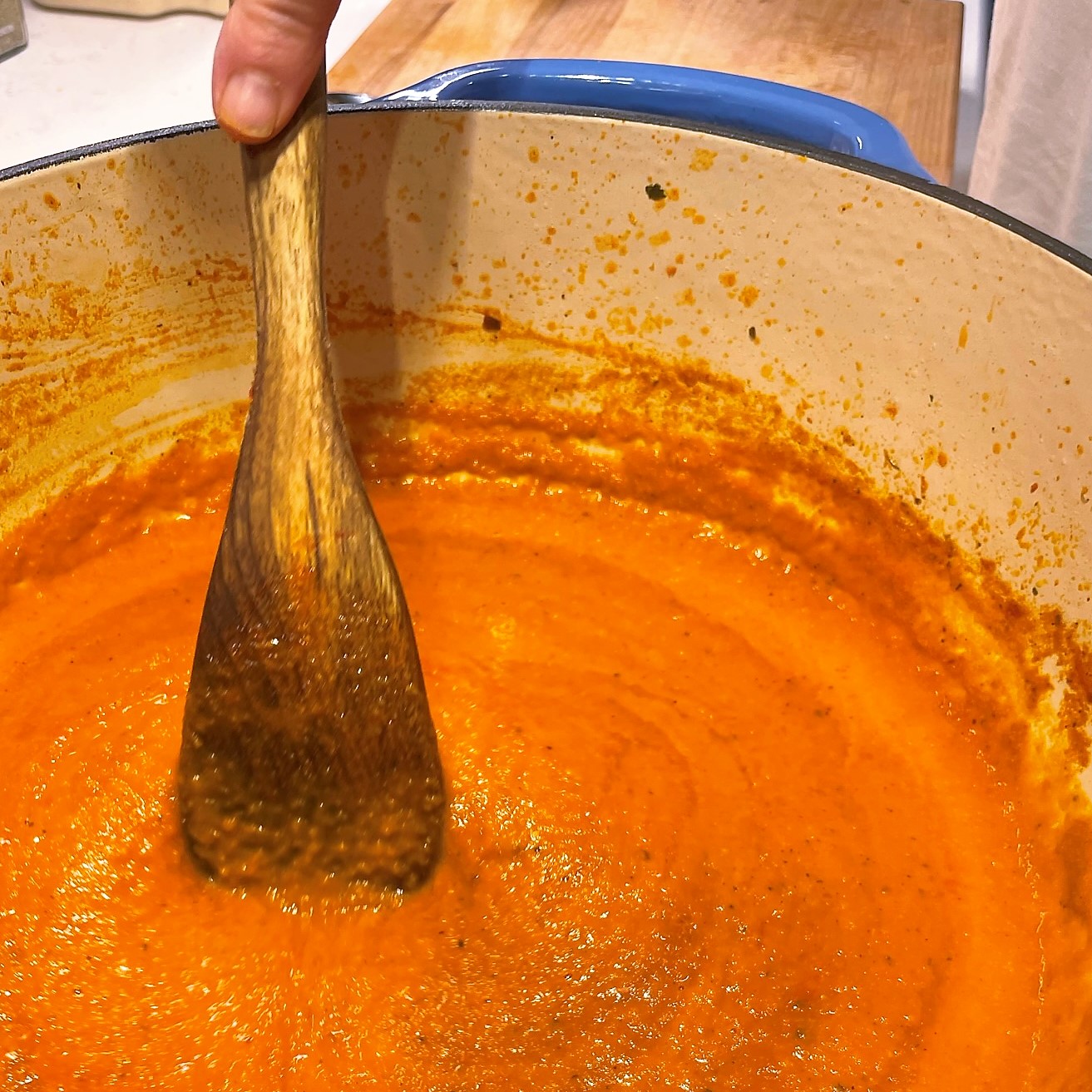 My intention for pizza sauce turned into something more interesting and complex, perfect for topping pasta, Italian meatball subs or even lasagna. I used fresh Roma tomatoes from our garden, rather than canned tomatoes. If you use canned tomatoes, choose a 28 oz. can of Italian plum tomatoes and reduce the simmering time by half.

6 thoughts on “Not Quite Pizza Sauce”