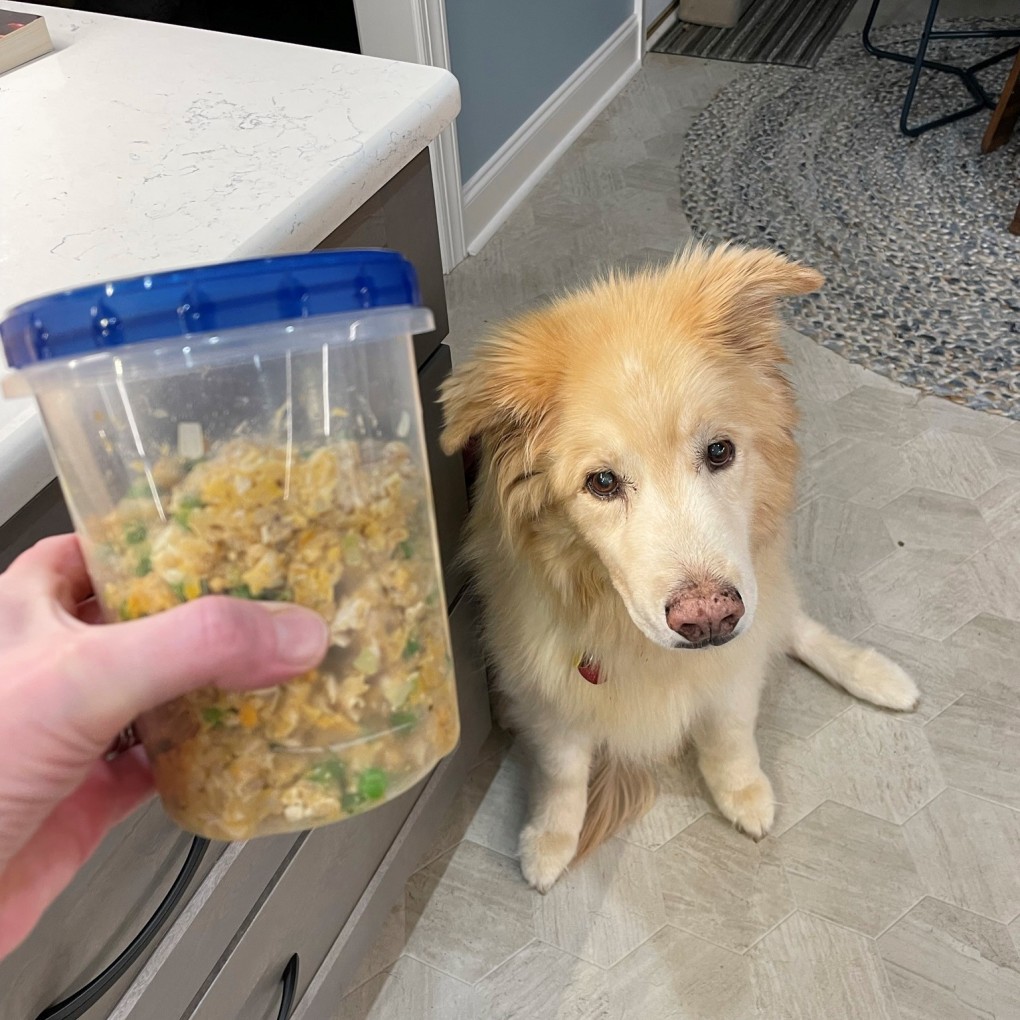 One of the most important dishes I made on Thanksgiving Day had nothing to do with the people at our table, and everything to do with one of the furry members of our family. Our senior husky mix, Nilla, has begun playing a new mealtime game with us, called “maybe I’ll eat and maybe I won’t.” We have been trying since September to figure out the rules of this new game, and for the most part, I believe we are winning. But she changes the rules just often enough to keep us humble.

Amid the excitement for our traditional turkey-and-sides meal, my husband and I were also celebrating Nilla’s 14th birthday, and this very good dog deserved a special treat of her very own, complete with ground turkey, sweet potatoes, green beans, carrots and peas. So yes, right in the middle of Thanksgiving day, I stopped everything else I was doing and made this for her. She is not spoiled, mind you, just really loved.

Nilla entered Les’s life with a heartbreaking and all-too-common backstory. When he and his then-teenage daughter fell in love with this little fluff ball at the county shelter, the workers explained that the blonde pup and her 11 littermates had been abandoned in a box beside the road. I hope to never encounter a person who is so heartless to do such a thing, but in Nilla’s case, there is obviously a happy ending (for her siblings, too, as Nilla was one of the last pups adopted).

I first met this girl in 2015, when my friendship with Les had developed to the point of me visiting him in his home, and it didn’t take long for Nilla to capture my heart, too. Her daddy would casually mention that “Terrie’s going to be coming over,” and Nilla would stand watch at the front door. It was obvious that she was as happy to see me as her daddy was.

Nilla is the perfect dog. She doesn’t jump or chew or dig or bark incessantly as some dogs do. She doesn’t roll around in stinky things and she hardly ever needs to be brushed. She is gentle, sweet and playful. I inform Les regularly that he will never again have a dog with so many desirable traits. Some of that can be credited to her training— Les started Nilla with a pro trainer when she was still a pup— but the rest is just her. She has an underlying personality that can best be described as “chill,” and we bonded even more when my cats and I moved in at Thanksgiving 2016. Nilla has been a fixture in the kitchen, always waiting, hoping, expecting a bite of whatever vegetable her mommy has on the cutting board.

When Nilla was diagnosed with Cushing’s disease in the summer of 2020, we were told that the average survival time is two years, which we figured would have been great for a large-breed dog that was already approaching 12.

Cushing’s is an adrenal dysfunction, caused by a tumor on the pituitary gland, and though Nilla did not exhibit any of the typical early clinical signs— excessive thirst and appetite, pot belly or panting— she did show signs of heavy anxiety that resulted from overproduction of cortisol. That anxiety, combined with some funky blood work, led to her diagnosis. Cushing’s can’t be cured, and treatment doesn’t slow down or stop its progression, but it does help relieve some of the symptoms. It has been tough for us to see our happy-go-lucky girl in various states of restlessness. She has always been afraid of thunder and fireworks but now, even an innocent sneeze by one of us will send her scrambling in sheer panic. We adjust.

Two and a half years later, she’s slowing down but still with us, and we know that love has a whole lot to do with that.

I’ve shared here many times the wide array of vegetables Nilla has enjoyed, and I have always been thrilled to watch her catch bites of them in mid-air. Until recently, that is. Her eyesight doesn’t seem to be what it once was, and her timing and depth perception are not as sharp, either. At her last dental cleaning, she lost a couple of teeth and doesn’t enjoy the hard, crunchy vegetables that were once her favorites, but she sure does love them cooked up in a mix with fresh meat and grains, and I am more than happy to oblige.

What can you do for the very best dog, but your very best in return? As Nilla’s appetite has become less predictable, I’ve been working to develop some new culinary creations just for her. Whatever it takes to entice her, make her hungry for more, give her energy to carry on, that’s what I’ll do. The most important meal is the one she will eat. And so far, so good!

All of the blends I’ve made for Nilla have started with lean ground turkey, chicken or (occasionally) beef. I gently brown the meat with a little bit of olive oil— skip the seasoning— and then I toss in a variety of chopped or shredded vegetables, plus a little bit of water to simmer and steam it until the veggies are nice and soft. She loves it.

If you’re going to cook for your dog, here are a few recommendations:

Check with your vet

This is the most important thing, even if you think you know what foods are OK for your dog. Some conditions or medications may not play nice with certain foods and you need that insight from your dog’s veterinarian. Also, note that a cup of fresh, homemade food may not have the same caloric and nutrition value as a cup of dry dog food. Generally, we mix the two to ensure she is getting enough of everything her body needs to be strong. Nilla’s vet, known at our house simply as Dr. Eric, is all in favor of the special effort we are making for her, and he sees the benefit at each follow-up visit.

A good diet for a dog consists of more than just protein, so aim to include fresh vegetables and fruits, but steer clear of the things that are universally bad for dogs, such as onions, chocolate, grapes and anything with a lot of seeds. This has been a little bit tricky for me, because Nilla has begun to turn her nose up at some of the vegetables she used to love. She’s all done with raw broccoli and cabbage, but cooked is acceptable, and mild-flavored potatoes and green beans are still favorites. She also enjoys apples, as long as they aren’t tart and the pieces are small. Grains help provide a balance as well, and Nilla has especially been enjoying cooked oats and rice mixed in with her food.

Keep it easy on the belly

Dogs are lactose-sensitive, so steer clear of dairy ingredients as much as possible. A bite of cheese here and there is probably OK, but keep it few and far between. And table scraps that include a lot of fat or bones should be completely off limits. Many years ago, I had a dog who developed pancreatitis after finding fat scraps in the kitchen trash, and he wound up in the doggy hospital for several days. Trust me, you don’t want to go there. Oh, and skip the salt because it’s murder on their kidneys.

Scrambled egg for the win!

When all else fails at mealtime, we have found that a warm, a scrambled egg does wonders to spur our girl on to eat. It’s also quick to prepare and easy to blend with the other things in her bowl. Eggs are easy to digest and metabolize, and I believe Nilla’s favorite thing about them is that we serve them to her warm.

Depending on how much homemade food your dog is eating, you may want to keep your batches small so the food stays fresh and nutritious. If you need to make a larger batch to save time later, divide it into bags or containers for the freezer and thaw when you’re ready for it.

Make a healthy broth for your pets

If you plan to cook rice or potatoes in broth, do not use store-bought varieties because every one of them contains onions! Make your own simple broth by simmering chicken or beef bones, and let them reduce to the concentration you need. It’s OK to add carrots to the pot, but skip onions, garlic, salt and spices. Skim off excess fats and strain out the solids before using it in your pet’s food.

Miss Nilla is a grateful dog, and we feel so lucky to be her pet parents. If all of this seems like a lot of effort for a dog, I’ll leave you with this thought:

One day, far sooner than we’d choose, this beautiful girl will go to the Rainbow Bridge. And on that day, I will not regret the effort. ❤

Consult with your pet's veterinarian before making any homemade food recipe.

17 thoughts on “The Most Important Meal”